“Something is wrong. I don’t mean with you or me or with any person. I mean in general." --Ragle Gumm

The Terrible Pleasure of Ubik

What fun it is to sit with a Philip K. Dick novel and try to say what it is about! Take Solar Lottery, for example. One could say that it is about the ambiguity between order and randomness. That works if you want to sit in Plato's cave and watch shadows dancing on the wall. And if you do not impose a scientific, philosophical, or religious framework on the story? What would you say? What's that story about?

Not to know, and yet to enjoy. That point-of-view has been my favorite pleasure in reading Dick.

But now here is EXEGESIS. What does Dick say about this story and that story in EXEGESIS? The novels Dick discusses at length in EXEGESIS are those which he uses to explicate his revelations of early 1974. The most visited novels are Ubik, Maze of Death, Three Stigmata, Valis, Flow My Tears, A Scanner Darkly, and The Divine Invasion. No floating-in-space for these novels. Each novel discussed carries a cosmic weight and intent that sets aside its literary and story-telling power. Innocence lost never to be regained. Never mind.

I like the floating-in-space read of Ubik. For me Ubik is about what happens in Ubik. It doesn't symbolize anything. Ubik isn't God. There's no character named God in the story. And gnosticism? I don't remember any characters talking about gnosticism, or the Logos, or anything else other than what is going on for them. Watching Dick in EXEGESIS wind his way through the mental maze of 2-3-74  with Ubik in tow reaffirms for me that a floating-in-space read of the novel is the way to go. His discussions of Ubik are ungrounded and without literary import, like EXEGESIS as a whole, which can only be read from a floating-in-space perspective. (That's the reason, I believe, why many people find reading EXEGESIS rather scary and why so many readers need to impose external ideas onto his stories. Floating-in-space is not a comfortable place to hang out for any length of time. Just ask Dick.)

Here, in essence, is the floating-in-space reading experience, which one can enjoy in reading almost any Dick story. In it one experiences the story as an object of gnosis, that is, an object through which one gains direct knowledge of reality, which can't be spoken. From inside the story, there is nothing to talk about. Events relate only to each other and not to things philosophical, religious, or scientific, which are mental invaders parachuting onto the landscape of the story taking its elements prisoner. Ubik is only itself. It doesn't mean anything. The singular process of something "gesturing" to itself as reality, as an object of gnosis, while at the same time acting as an object of personal experience, subject to the invasion of interpretations, generates an existential tension in Dick as he works with Ubik in EXEGESIS. His torment over this tension is painfully visceral. And, ultimately, of course, EXEGESIS, the medium of this discussion, is itself an embodiment of the same irresolvable tension, which is also the human existential dilemma--how to self-exist as a discrete being and be grounded into something at the same time. Can't be done. In this context, Ubik and EXEGESIS, as objects of gnosis, evoke the same existential terror. They only exist as themselves.

And for the reader of Ubik? It's this simple: if you experience Ubik as gnosis, you get pure, undiluted pleasure; if your experience of Ubik is modified by outside influences, your pleasure is derived. The pleasure of gnosis cannot be located in any elements of the story; in fact, it can't be located at all. It's just there. What is is. (Thus no story elements in this piece . . . ) The derived pleasure can be located in any number of elements in the story or in the outside influences, which include comparisons to other PKD works, biography, science fiction as a genre, and any intellectual frameworks. 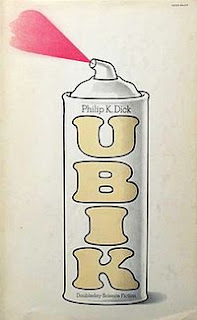 As Dick's approach to Ubik moves through EXEGESIS, Ubik is transformed from a piece of writing that explains his experiences into an object of gnosis. Ubik the novel and the entity Ubik become reality in his mind in the same way that it is reality in the story. Ubik reveals itself to Dick through the story Ubik and at the same time points to itself as reality. Ubik wrote Ubik using Dick as its instrument of expression, and that was the intrusion of 2-3-74.  [That process can be followed by clicking on the links below for passages in EXEGESIS.]

It's all the same with Dick. Like he says. Monster mind scratching away at its own existence without anything substantive to hang on to. It's okay to go insane over that one while toasting Ubik; and if you don't go insane? --well, there's something insane about that.

Relevant passages from EXEGESIS posted on my EXEGESIS blog:
Ubik as anything you want.
Ubik as symbolic of God on the level of trash.
Ubik outside a system of thought.
The source of Ubik is Ubik.
Ubik the novel ex nihil.
Ubik: The Most Important Book Ever Written

Dick Experiencing the Universe as an Object of Gnosis

Posted by John Lentz at 5:12 PM No comments:

Views from the Edge

The distinction between sanity and insanity is narrower than a razor's edge, sharper than a hound's tooth, more agile than a mule deer. It is more elusive than the merest phantom. Perhaps it does not even exist; perhaps it is a phantom. VALIS
This is a mournful discovery:
1) Those who agree with you are insane.
2) Those who do not agree with you are in power. VALIS
Like a boat launched without paddles into a current, he was moving along without control, going wherever it took him, into the indiscriminate darkness beyond. Radio Free Albemuth
There is no protection. Being alive means being exposed; it's the nature of life to be hazardous--it's the stuff of living. Clans of the Alphane Moon
The bedrock basic stratum of reality is irreality; the universe is irrational because it is built not on mere shifting sand--but on that which is not. VALIS
Instead of psychosis, it was more on the order of a vision, a glimpse of absolute reality, with the facade stripped away. And it was so crushing, so radical an idea, that it could not be meshed with ordinary views. And the mental disturbance had come out of that. Martian Time-Slip
He saw a hole as large as a world; the earth disappeared and became black, empty, and nothing. Into the hole the men jumped one by one, until none of them were left. He was alone, with the silent world-hole. Martian Time-Slip
Nothing can stop me, Arnie said to himself. Gubble, gubble! Manfred cried as they sped along. Martian Time-Slip 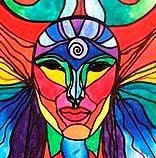 Perspectives from the New Timeline
Fire of Life Oracle

Recognition and Dysrecognition in the World of PKD
The Virtues of Rationality and Madness
Eye in the Sky (1957)
Horror, Beauty and PKD
"The Gun" (1952)
Time Out of Joint (1959)
The Pleasures of Uncertainty While Reading PKD
Radio Free Albemuth (1985)
Clans of the Alphane Moon (1964)
PKD's "Stability" as a Quantum of Pure Perception
VALIS Preliminaries
VALIS Casting Off (1)
VALIS Pink Beam Ahead! (2)
Exegesis: Stumbling Around Inside the Kingdom
Handbook for Those Obsessed with PKD
Crash Landing on Martian Time-Slip
Mars Revisited
Cracks in the Reality of Martian Time-Slip
EXEGESIS: A Radically New Reality
EXEGESIS Blog
EXEGESIS Quibiquitously
The Terrible Pleasure of Ubik